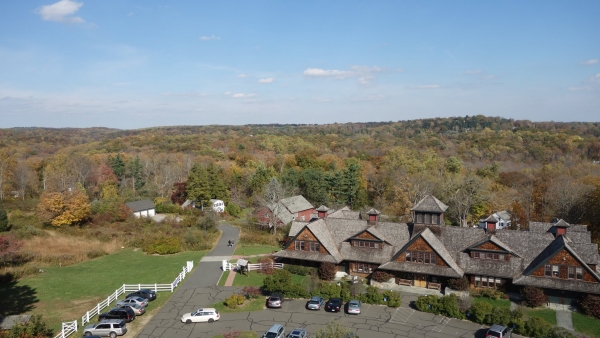 (by Liz L.) On April 11, east coast Rama students met to commemorate Rama’s mahasamadhi at the Audubon Society in Greenwich, Connecticut.  The Audubon facility resembles a classic Greenwich estate with spacious grounds.  The entrance to the main building is like a large home foyer with an upstairs open hallway.  We hung a large banner for Surfing the Himalayas over the entrance to the hall,  right at home with the statues of hawks and falcons.

The electronic tribe gathered in a large, separate meeting room with a kitchen and a piano in one corner.  As Bodhi-Joaquin Lievano of Zazen set up his musical instruments, we all mingled, sipping wine and nibbling an assortment of appetizers.  The setting was warm and comfortable, and we – ST1s, ST2s, and ST3s – were all so glad to see each other that the hum in the room grew bright and audible.  Our room was lined with prints from John James Audubon’s thangka-like drawings of feathered creatures.

After a delicious catered dinner, it was time to stand up and share stories of transformation generated by encountering Rama and his teachings.  When the very first person stood up (thank you, Jose!), the light in the room shifted.  It became powerful and clear.  People spoke of transformation in business, in laughter, in selflessness.  When I stood up, I wanted to say that Rama’s transmission of the meditation experience had transformed and continues to transform daily.  That prior to meeting him I had a very limited understanding of what meditation was, but that to meditate with intensity and thought-free purity was the transformative Rama challenge we had all received.  I’m not sure I said that, but I think it came across.

I also spoke (others did as well) of my transformation from wimp to warrior, how I never could have anticipated the strength and power that Rama’s confidence in women had given me.  I said that the battles I had waged had shifted me forever.

I was in the middle of the group of speakers.  Whenever anyone speaks truth on Rama’s behalf, the energy transmission becomes pure Rama – timeless light and infinite energy.

After a very short break, Bodhi began to play.  We were so held up by Rama’s energy before the concert started, that when the music began it took us on another voyage entirely.  It was like sitting deep in the desert, the most profound stillness, the loveliest and most exquisite awareness.  It was 40 minutes of ecstatic awareness.  Bodhi’s playing is a jewel.  As Bodhi said when you listen to the music of Zazen you listen for the stillness between the notes.  This takes on a whole new meaning when he plays in person.

So there we were, in a lovely setting, held in the light of enlightenment. After Bodhi’s concert, we sat to meditate for another ten minutes. Effulgent fullness.  Sublime emptiness.  Not one thought.

Thank you, Rama.  Thank you to Bodhi and those who stood up to speak.  Thank you to everyone who attended and who tuned in.  The Teacher, the Dharma, the Sangha:  Rama’s Mahasamadhi.